AXE THROWING – A NEW POPULAR SPORT FROM THE U.S. 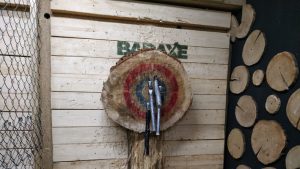 Deriving from ancient Vikings, axe throwing has become quite a favored sport in recent years, particularly across the ocean – in the United States and Canada, where the revival has actually began. In Toronto, 2006, hardly anyone believe that it would become a worldwide sport. How did it start? Why it became so popular? Who can play it? Answers for these and more questions can be found below!

Right now, it have been almost 13 years since the first Backyard Axe Throwing League was established, spreading all over Canada and coming around to subsequent cities in U.S. and Europe. The idea was born quite accidentally in 2006 in Toronto, where a bunch of friends decided to kill their boredom by throwing an axe at a stump in the backyard. Little did they know that this innocent idea for passing the time would evolve into a worldwide sport. Matt Wilson, the BATL founder and its CEO reminisce that upon returning back home to Toronto, he decided to set up a target in his backyard and invite some friends over to show them what a fantastic feeling it can be to throw an axe. Soon after the group of friends doubled, then the doubled group doubled and before Matt knew it, he was hosting 2 full leagues of a total of 60+ per night in his backyard. Not including all the spectators that stopped by and watched how a new sport was being born.

Basically everyone who plays it, admits that axe throwing triggers fantastic emotions. It’s a kind of cathartic experience, which helps you lose all your anger, fear, anxiety and negative emotions. Of course the beginnings can be difficult, as you often need to overcome your own fright. But, after you do it for the first time, you want to do once more! Probably this constitutes the main reason behind axe throwing’s growing popularity. The other factor can be connected with competition. In terms of rules it can be compared with e.g. darts or bowling, where everything is basically in your hands. You compete with other individuals, simultaneously socializing and having fun together. That is why most often axe throwing is offered in bars or pubs.

Such venues can be found in Poland as well. For example in Krakow there is an axe throwing club, called Bad Axe, where people can come solo or with friends and have fun throwing axes, all accompanied by some drinks and snacks. There are lanes prepared for up to 20 people, enabling one to organize stag or hen parties there, as well integration evenings or company events. Of course all in accordance with the highest safety standards.

Some people might see the blade of the axe that you use in this game and wonder if it is a safe sport. Apparently, axe throwing is an incredibly safe sport, as long as proper safety guidelines are followed. It usually takes place in a contained environment or limited area of an establishment. According to the statistics, percentage-wise there are less accidents noted in axe throwing than in e.g. baseball, football or other contact sports. Axe throwing, similarly to Darts is a non-contact sport, which essentially limits the risk of injury. Moreover, according to the NATF, the organization that sets the standards for ax-throwing to keep it safe, there were only five or six minor injuries throughout the sport’s history, resulting from not knowing how to handle an ax. The problem is solved by plenty of on-site instructions and monitoring help.

Axe throwing can be a great fun for anyone, who likes a bit of thrill, looks for hen or stag party ideas or simply wants to have a fun with friends. Both men and women can play the game, with women as the ones who actually often come out on top.

RESERVATION
ДЕВИЧНИКИ, МАЛЬЧИШНИКИ В КРАКОВЕ - ЛУЧШИЕ ИДЕИ И МЕСТА ДЛЯ МЕРОПРИЯТИЙ В ЗАКРЫТЫХ ПОМЕЩЕНИЯХ
WHAT TO SEE AND DO IN KRAKOW? SOME IDEAS TO THINGS TO DO IN KRAKOW
Next Post
UNUSUAL IDEA FOR A BIRTHDAY PARTY?